A seismic survey uses sound waves to determine which layers and structures are present in the soil. A ship or vehicle sends out sound signals. When these signals reach a boundary between two different materials, some of them are reflected (reflection) and some of them travel at a different angle (refraction). Eventually, these signals return to the surface, where they are picked up by a geophone or hydrophone. This data can then be analyzed to determine which materials are present in the subsoil. This technique is mainly performed in marine environments, but can also be performed on land. 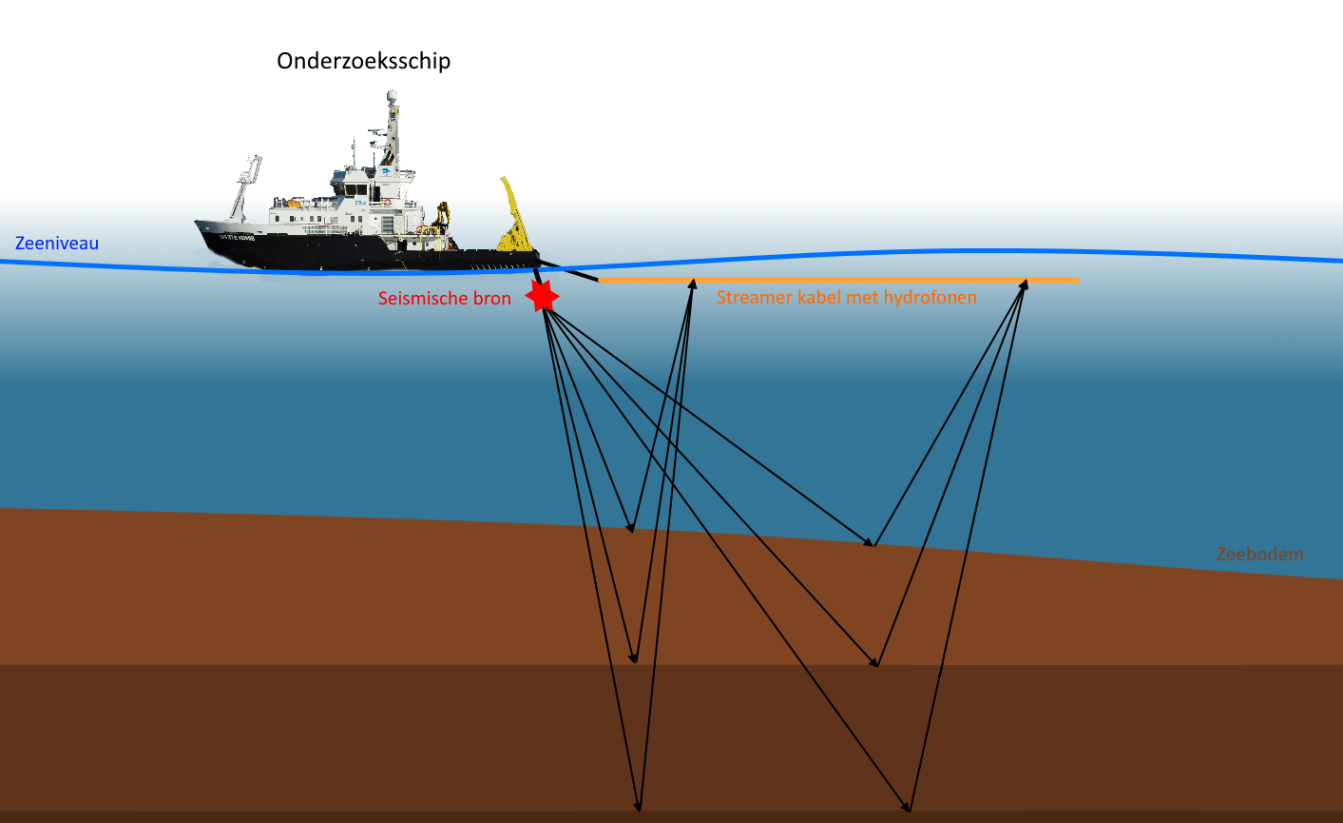 Schematic of a seismic survey

A magnetic survey uses a magnetometer to detect variations in the Earth's magnetic field. Different materials react differently to the Earth's magnetic field. For example, steel or iron will react strongly, while wood will hardly react. After analysis, these variations, can help to understand what structures and materials may be hidden in the subsurface. This technique can be applied both on land and at sea. The technique is mainly applied used to identify archaeological structures.

LiDAR, also know as laser altimetry, stands for Light Detection and Ranging. As the name suggests, this technique uses laser pulses. LiDAR is based on the measurement of the time between transmission and return of reflected laser pulses, whereby this time interval is converted into a distance. The technique can be conducted from a boat to the seabed, or from, for example, an airplane or a helicopter to the earth's surface. When these pulses are reflected by one or more objects, they create one or more echoes (or returns) per laser pulse, which are in turn recieved by the scanner. This creates a 'point cloud', which can be filtered and categorized to create a digital terrain model (DTM) of the seabed or land surface. 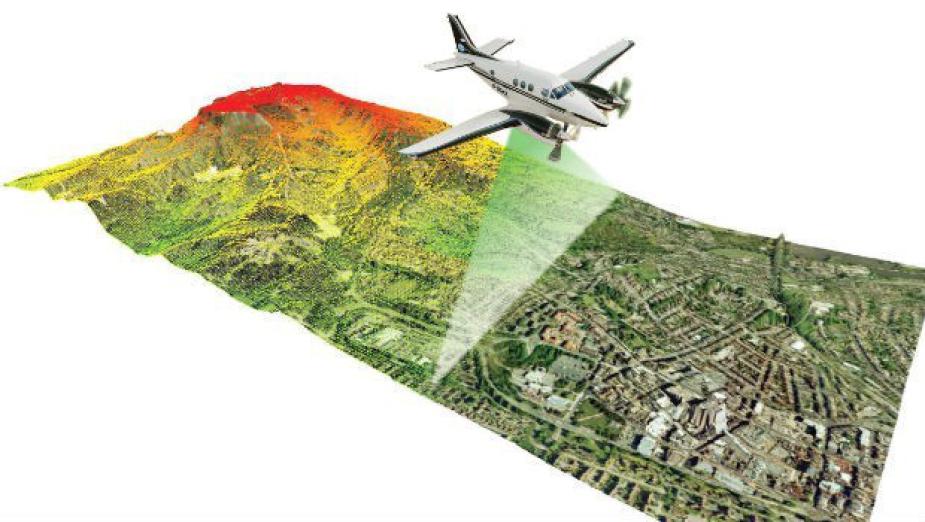 Visualization of LiDAR carried out from the air

EMI stands for electromagnetic induction. This technique simultaneously measures the electrical conductivity (EG) and the magnetic sensitivity or susceptibility (MG) of different soil volumes. The EC supplies information about the soil composition (clay, loam and sand content, organic material), while the MG indicates the presence of anthropogenic influences. Strong MG signals are obtained when measuring heated materials (eg fire sites, hearth pits, brick, ceramics, metal slag…) and metal objects. In addition, the MG measurements respond to soil disturbances such as backfilling with material of deviating organic content (such as filled-in canal structures or underground foundations). With EMI, both large landscape units and more subtle, smaller archaeological traces can be mapped in detail in 3D.

Execution of an EMI survey

Carbon-14 or C-14 dating is a method used for determining the age of relatively young organic materials. All life on Earth consists mainly of carbon. Carbon has three naturally occuring isotopes C-12, C-13 and C-14. Isotopes are atoms of the same element, with differing atomic weights. Both C-12 and C-13 are stable, while C-14 is unstable or radioactive, with a half-life of about 5730 years. As long as an organism is alive, it will take up all three carbon isotopes. As soon as the organism dies, the absorption of carbon stops.

OSL stands for Optically Stimulated Luminescence. Some commonly found minerals within the soil, such as quartz, emit a small light signal when exposed to light. This luminescence results from the radioactive ambient radiation that quartz grains store as soon as they become buried and no longer receive light. The longer the quartz grains are burried, the greater the stored radiation.

By taking soil samples in a perfectly dark environment, an OSL device can be used to measure the amount radioactive radiation the quartz in a sample emits when illuminated. That luminescence signal tells us when the sediment was last exposed to sunlight. For example when old soil was covered, or when an earthen construction was built by humans. Luminescence dating can be used to date older materials than the commonly used C-14 dating, namely up to 200,000 years. 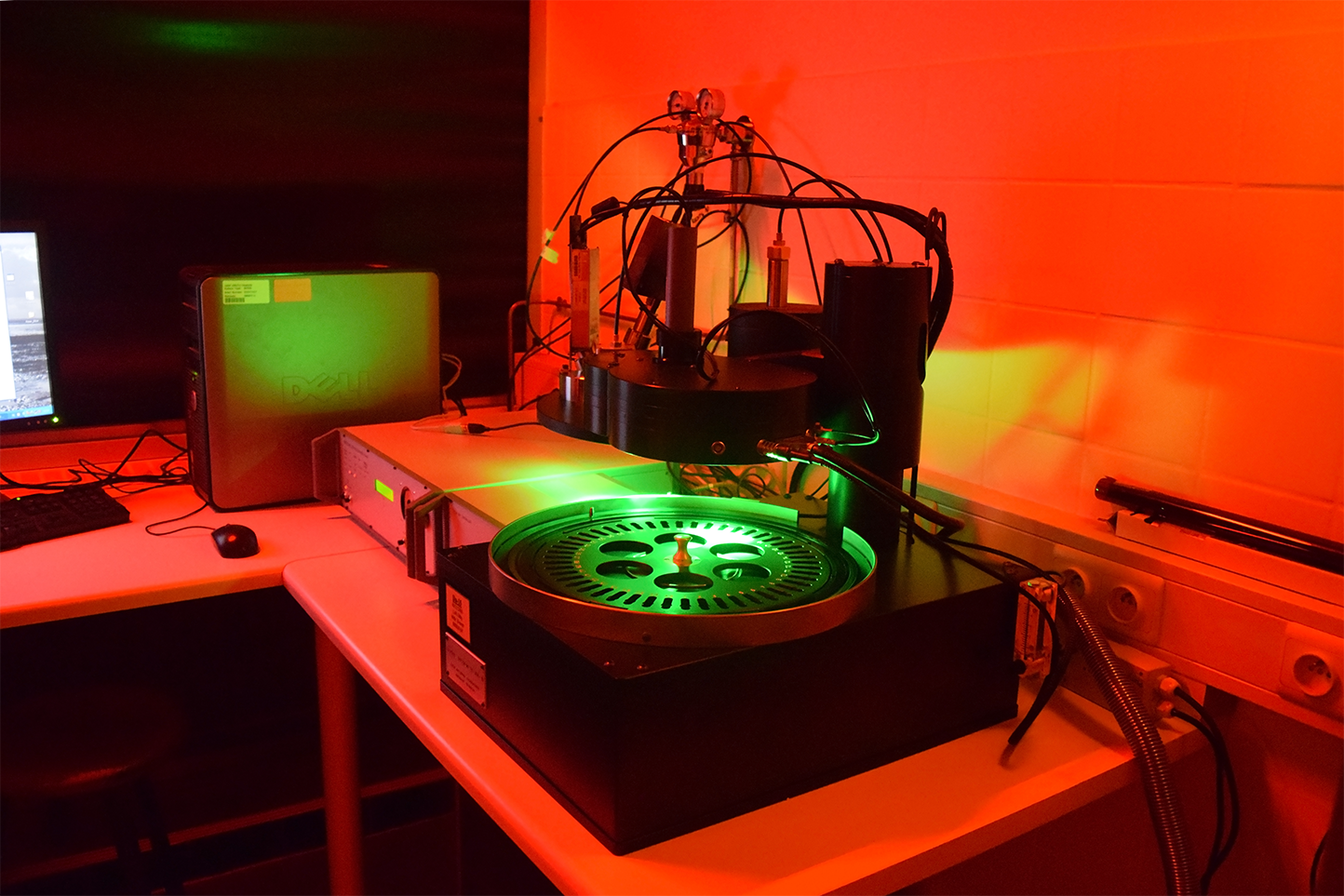 Example of an OSL device.